How to Change Rear Wheel-Studs on your Nissan 300zx

This is a job I had to do on my own car a little while back. At the time I couldn’t find a decent how-to so I wrote one up for the aus300zx forum. Hopefully it gets someone out of trouble!

The problem I had was a wobbly rear stud. I figured you have to buy them (Nismo extended studs) as a set of five so why not just replace the lot? I had previously fitted Nismo studs to the front to use with 5mm spacers but the rears are a little more involved.

For starters these are the tools I used. The whole job took just under an hour from lifting the car to packing the
tools away. 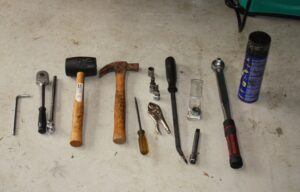 So first step take the wheel off, this is what you’re left with. Note jack stands under the sub-frame on both sides, and a trolley jack under the diff. Safety first!

Make sure the car is in neutral and the hand brake is lowered (off). 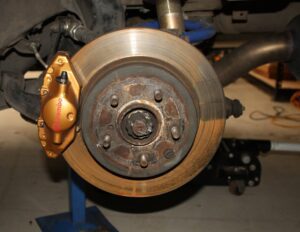 First step is to remove the caliper. One bolt top and one bottom. Remove these completely. I found the T handle bar useful as I only have a 600mm breaker bar and there just isn’t enough to swing one under there. 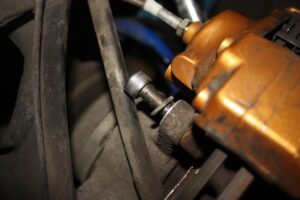 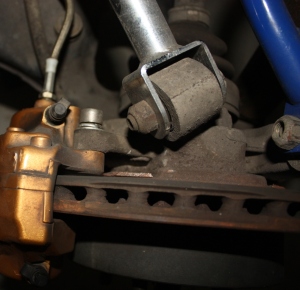 Another tech article I have read suggested bolting the caliper to the front of the hub, but I found it easier to sit it behind the rotor. There’s plenty of room and plenty of play in the lines (I’m using goodridge braided lines, stock may be different?), just be careful not to let it get caught up in the axle or suspension arms. 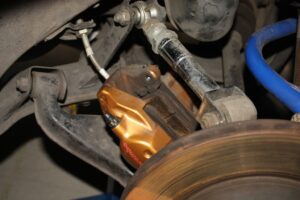 Next step is to remove the rotor. In my case I had to loosen the handbrake shoes first. Do this by rotating the rotor until the adjustment hole is at the bottom as pictured below. You will need to pull the rubber plug out. 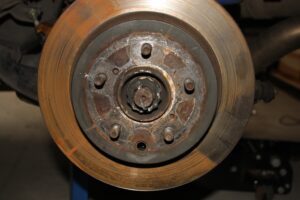 The adjustment hole gives access to a starwheel that is used to adjust the handbrake. Rotate it down to loosen the shoes. Even with the shoes loosened significantly I still had to use a rubber mallet to remove the rotor.

With the rotor off you have access to the hub and handbrake shoe assembly.

I found access to the back of the studs was a little tight with the brake-shoes in place, but I hate dealing with shoes…. so I found the easiest solution was to remove one of the shoes enough that I had room to access the studs. On both sides I removed the shoe closest the front of the car.

First step remove the spring pictured below, locking pliers (vice grips) are your friend. Unhook the end pictured on the left (of the spring -centre of the assembly), keep a close eye on it though as the other end can easily fall out of the shoe once you start moving things around. 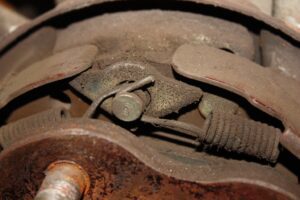 The remove the pin pictured below. Simply push in with a flate blade screwdriver and turn. Put the pin and the spring that sits underneath it to one side. Don’t lose anything! 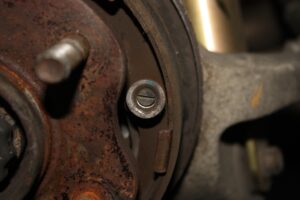 With the above pieces removed you should have enough room to manipulate the shoe off to one side. Secure it by poking the top behind the hub as pictured below. 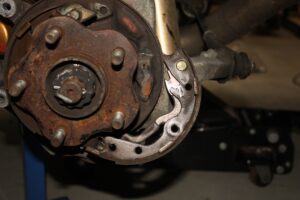 The next part is easy. I used the claw hammer to knock the old studs out through the rear of the hub. I have read another article that suggests using a nut or similar on the end of the old studs to prevent the threads being damaged but these are going straight in the bin so I couldn’t see the need. I did squirt the base of the studs with some NuLube (Nulon brand lube). A few sharp taps and out they come.

Your next step is to insert the new studs. I sprayed liberally with Nu Lube and pushed the splines into place by hand. I didn’t want to use a ratchet until the studs were secure for fear of damaging the splines. 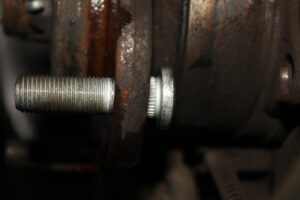 Now thread a stack of washers over the stud. I used a packet of ten 1/2″ flat washers from my local auto one. Now the other tech article I read suggested using a standard nut (M12 x 1.25) to pull the studs through but I had an old set of wheel nuts and couldn’t see the harm in using one of those. I made sure to pick one that threaded on easily by hand so as not to risk damaging the threads on the new studs. 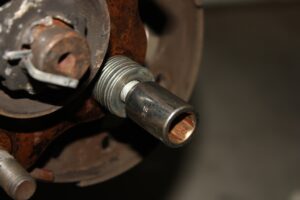 Torque the wheel nut with a ratchet. You may wish to use a pry bar or similar to stop the hub from turning… see picture below. 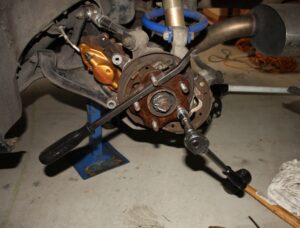 Pull the stud all the way through, see picture below. Notice the gap between the head of the stud and the back of the wheel-hub has closed. 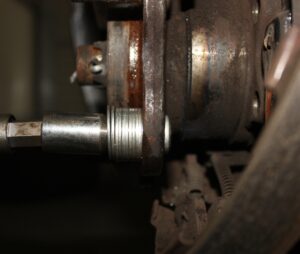 Spin and repeat as needed

I changed all five studs on both wheels. I didn’t need to but having gone to this much trouble I figured I may as well. Now I did find that the washers deformed due to the shape of the wheel nuts I was using but this was easily solved by rotating the washers so that the one on top (and making contact with the wheel nut) was always new. A standard nut may be a better option where possible.

And that’s really it.

Once you have changed the studs reassemble the handbrake shoes in the reverse order of above. Reinsert the pin and the refit the spring on the top of the shoe. Replace the rotor and refit the caliper. Tighten the caliper bolts to 80nm. I had a really hard time getting a torque wrench on to the caliper bolts due to the extra length of the hex key fitting. I managed to torque the top bolt but had to use an 8mm allen key to get the lower bolt “tight enough” as there just wasn’t enough clearance to get the wrench in.

Access the starwheel previously used to loosen the handbrake shoes and rotate it upwards until the shoes are expanded completely and you cannot rotate the caliper. Then rotate the starwheel down four to six clicks. You should be able to turn the caliper by hand but still feel some drag. Replace the rubber plug.

Refit the wheel, lower the car, and tighten wheel nuts to 100nm.

Anyway I enjoyed documenting this little job and I hope someone finds the writeup useful.

Bringing you top quality parts for your high performance vehicle at affordable prices. RGS Performance operates on the simple premise that I will only sell you parts that I would consider fit for use on my own car.